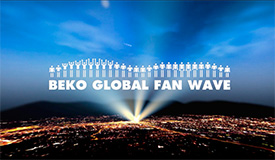 We’re on a mission to create the world’s largest fan wave, and you can get involved too. To celebrate our new partnership with FC Barcelona we’re launching a global campaign that will see fans join together to help create the biggest Mexican wave you’ve ever seen.

To take part all you need to do is visit globalfanwave.com where you’ll be able to upload a short video of yourself and your friends, family or work colleagues taking part in a Mexican wave. Once uploaded, share your video clip on Facebook or Twitter using the hashtag #JoinTheTeam.

The best part…our favourite clips will be shown at no other than the Camp Nou stadium throughout March and April. Some will even be shown at the most anticipated match of the season ‘El Clasico’ on 22nd March. The game between FC Barcelona and Real Madrid is estimated to be watched by 500 million sports enthusiasts worldwide. Your video could appear, so make sure you tune in!

If the glory of having a video clip shown at one of the most watched sporting events of the season isn’t enough, every entry will automatically be entered into an incredible prize draw to win one of three ‘Money Can’t Buy’ weekend trips to Barcelona. The lucky winners will be treated to flights, luxury accommodation, a VIP stadium tour and tickets to a match all courtesy of Beko. Ten runners up will also receive a signed FC Barcelona football shirt.

What are you waiting for…get filming!